Watch: Private Money in Prosecutor Elections: the Pros, the Cons, and the Facts 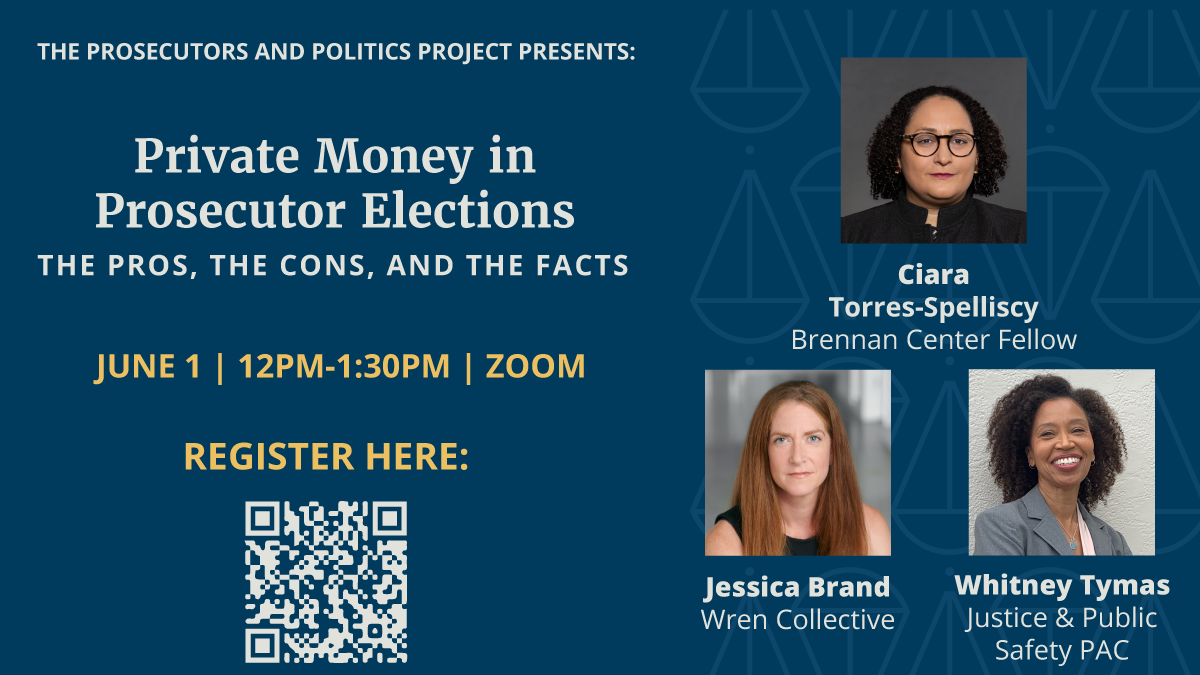 Watch now: Play a recording of this panel discussion

The Prosecutors and Politics Project will host a lunchtime conversation and share the results of the first national study of campaign contributions in prosecutor elections. Attendees will also hear from experts about the promise and the peril of private financing in prosecutor campaigns.

Jessica Brand, Wren Collective
Jessica Brand is the founder of the Wren Collective, which provides research, policy, and communications support to those who are trying to shrink the criminal legal system and implement policies that actually help communities thrive. She has helped run numerous political campaigns, including the successful Larry Krasner and Kim Gardner reelections, and works with progressive prosecutors across the country. “The Wreners” also advise grassroots and grasstop groups, athletes, and artists on their advocacy work. Previously, Jessica was the legal director at The Justice Collaborative, an attorney at the Texas Defender Service, and an appellate attorney at the Public Defender Service for the District of Columbia. Jessica has trained attorneys on forensic and mental health issues across the country.

Ciara Torres-Spelliscy, Brennan Center Fellow
Ciara Torres-Spelliscy is a professor at Stetson University’s College of Law teaching courses in Election Law, Corporate Governance, Business Entities, and Constitutional Law. Prior to joining Stetson’s faculty, Professor Torres-Spelliscy was counsel in the Democracy Program of the Brennan Center for Justice at NYU School of Law where she provided guidance on the issues of money in politics and the judiciary to state and federal lawmakers. She was an associate at Arnold & Porter LLP and a staffer for Senator Richard Durbin. She is the author of the books Corporate Citizen (2016) and Political Brands (2019).

Whitney Tymas, Justice & Public Safety PAC
Whitney Tymas is an attorney with over 30 years of experience in criminal law. She has led initiatives to promote fairness and accountability and has taught and presented widely across the nation. Whitney advises individuals, organizations and political action committees, such as Justice & Public Safety PAC, Justice & Public Safety Action Fund and others, about justice policy and strategy. In 2015, Whitney launched a national initiative focused on electing progressive local prosecutors, committed to equity and public safety. Since then, she has overseen almost fifty campaigns in prosecutor races across the country. Before this, Whitney served as director of the Prosecution and Racial Justice Program at the Vera Institute of Justice. This groundbreaking national program identified and sought to remedy patterns of racial injustice and ethnic disparity caused by prosecutors. Beginning in New York City as a public defender with the Neighborhood Defender Service of Harlem, Whitney also practiced law at the Office of the Appellate Defender, the Legal Aid Society Criminal Appeals Bureau, as a prosecutor in Virginia, and in private practice as a defense and civil rights attorney. Whitney has practiced in state and federal courts, at the trial and appellate levels, handling a wide range of criminal cases, from misdemeanors to multiple defendant homicides. Whitney is a graduate of Barnard College and New York University School of Law, where she was a Root-Tilden-Snow Scholar. She was born in Washington, DC, came to adulthood in Harlem, and has devoted her life to public service and social justice.