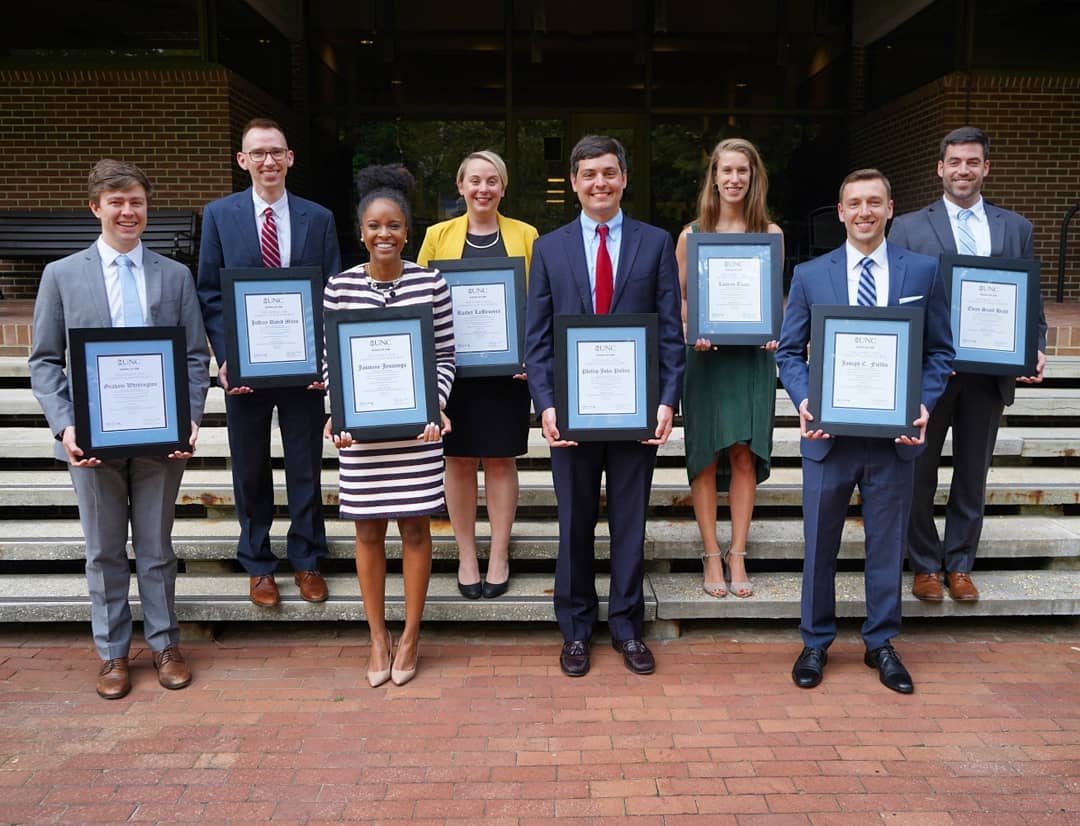 Order of the Coif

The top ten percent of the graduating class is eligible for election by the faculty into the Order of the Coif, the national legal honorary scholastic society. Only students who have completed at least 75 percent of their law studies in graded courses are eligible for consideration.

The Order of the Coif defines “graded courses” as those for which academic accomplishment is recorded on the basis of educational measurement involving four or more discriminators.

Because UNC accepts transfer credits, but not grades, it is unlikely a transfer student can meet the 75 percent rule and qualify for Order of the Coif.

The Bane Writing Award recognizes the importance Carolina Law places on writing. Faculty members nominate papers that that they feel are exceptional in comparison with other outstanding papers. It is an honor based solely on the merit of faculty-nominated work, regardless of the student’s GPA, that reflects passion for a particular topic and the ability to translate that passion into exceptional written work.

Written work is eligible for nomination if it was part of a faculty-evaluated course for credit, including courses, seminars, and independent studies. Student material written for journals or Holderness Moot Court activities, for which credit is not normally given, is not eligible, in part because specialized awards for best written work are often already awarded by journals and moot court teams, and also because that written work typically is not evaluated by faculty in the normal course of affairs. Exceptional work done at any time during a student’s law school career, including first-year written work is eligible.

The Associate Dean for Academic Affairs forms a subcommittee to determine whether sufficient papers have been received to justify one or more awards in that academic year. The winner receives a $1,000 prize.

This is presented at Commencement to the student who has made the most consistent improvement in academic work since enrollment. The winner receives a $1,400 prize.

Named for a former Carolina Law faculty member, the Millard S. Breckenridge Prize in Law is presented to a graduating 3L who has demonstrated excellence in the study of tax law. This honor is accompanied by a $2,550 monetary award. The recipient is chosen by the tax law faculty and awarded to a student with outstanding overall performance in tax law courses.

This award is given to the student that writes the best essay on the rule of law. The winner receives a $2,350 prize.

A medal is give to the student who has written the best address on the “Ethics of the Legal Profession.”

The James E. and Carolyn B. Davis Society is intended to recognize third year students possessing both academic and personal excellence and a willingness to serve for the betterment of the school of Law and its faculty and students. Inductees will be recognized at commencement and receive a framed certificate in honor of their selection. They will also be honored at a reception during commencement weekend. A Davis Society plaque with each recipient’s name is also displayed in the school’s portico.

To be considered for the James E. and Carolyn B. Davis Society, a third year student must be nominated, in writing, by either another law student (any year), faculty, or staff member. Those making nominations should consider the qualities of leadership ability, extracurricular activities, character, and academic achievement of the nominee.

This award is given to a student who excels in Constitutional Law. The winner receives a $1,000 prize.

The Winston Crisp Award was initiated by the Student Bar Association during the 2005-2006 school year to recognize excellence in student leadership. Winston Crisp served the law school as associate dean of student services for 13 years. He demonstrated extraordinary leadership ability throughout his time at Carolina Law, both as a student and as an administrator. The Crisp Award seeks to recognize students who exemplify the same outstanding leadership.

Students in all classes are eligible to be nominated for the Crisp Award. Nominated students need not hold an executive board position within their affiliated organizations.  Members of the SBA Executive Committee are not eligible for nomination.

Nominations are collected in April and should include a description of the nominee’s leadership abilities. Examples of excellent leadership include outstanding coordination of student projects, effective decision making skills and exceptional willingness to assist fellow members of the law school community. The winner receives a $1,600 prize.